Is The ANCHEER Indoor Cycling Bike As Multifunctional As Claimed? 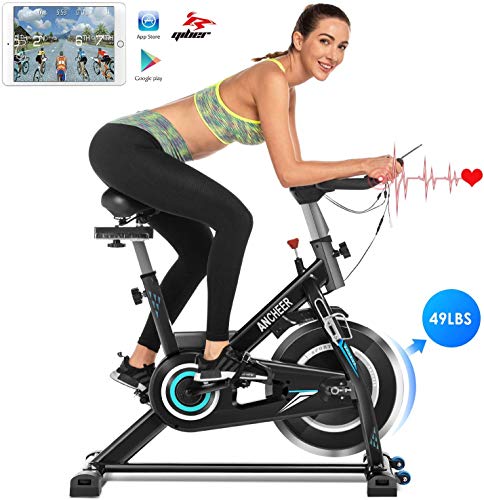 Indoor bikes like the ANCHEER Indoor Cycling Bike can be a great tool for building tone and strength at home.

This one looks as though it will be a quality option with a lot to offer because of the promise of a 3-way system, app connectivity and the idea of infinite resistance.

But, skeptical consumers may wonder if this is all a little overblown and if there are some hidden flaws to this system. So, does it deliver the workout that everyone is after?

The Pros and Cons of this ANCHEER Indoor Cycling Bike.

This ANCHEER Indoor Cycling Bike has some interesting ways to work out on a strong base.

The main selling point of this stationary bike seems to be diversity. There are high hopes here from new users because of claims that you can simulate the experience of climbing, weightlifting and running while riding on this ANCHEER exercise bike.

The styles of workout and options available come down to two elements – the adjustable handlebars and the app connectivity. The later is something to discuss further when dealing with the drawbacks The handlebars, however, are a clever idea with the 3 places to hold on. 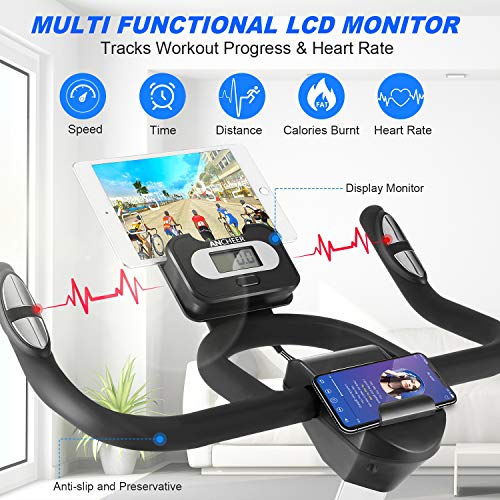 The position changes your posture as you ride. You can lean forward and hold onto the ends of the handlebars for the walking mode, hold onto the central loop for an upright posture for climbing, or hold on the bars as though it were a road bike for cycling.

Just be aware that the pulse sensors are at the tip, so you can’t gain that information while holding on in any other place. From there, you can change the intensity of the session through knob for magnetic resistance.

There is meant to be infinite resistance with the added benefit of a smooth motion from the heavy 49lb flywheel.

You can also take advantage of a range of other great features in the hardware of this stylish exercise bike. The seat is adjustable in a different direction, there is a stable base to resist wobbling on tougher sessions, there is also a water bottle holder so there should be no concern about staying hydrated.

There are some weaker elements to this ANCHEER Indoor App-Ready Gym Bike and issues with the console.

When it comes to the downsides of this bike machine, it is important to understand that the console isn’t as smart as you might hope. There is a compatible app with additional programmes and personalised coaching.

But, this doesn’t come through on the built-in monitor. That monitor is a small device with a tiny readout of basic data. It doesn’t even appear to be backlit.

Instead, the app and other helpful tools need to be downloaded onto a compatible tablet, which then sits in a shelf on top. So, the “multifunctional LCD monitor” isn’t necessarily as multifunctional as claimed. 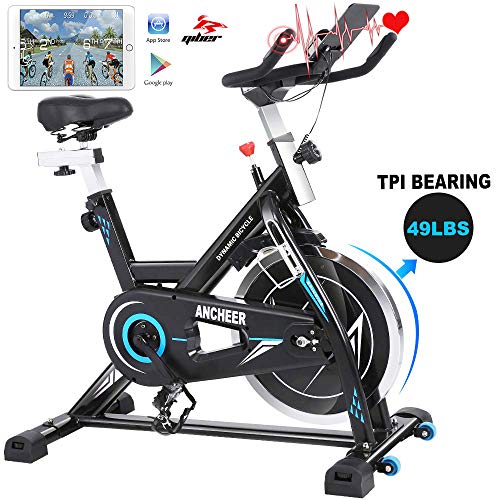 Then there are some comments about cheaper parts, such as the water bottle holder and the cages on the pedals. They are nice in theory when they work but are prone to breakages. They seem to be afterthoughts on what isn’t the cheapest machine anyway.

What does this all mean for the final verdict on this ANCHEER 3-Way Exercise Bike?

Ultimately, the appeal and worth of this machine largely come down to how much you plan on using the different modes and the app.

If you are sure to set up the app with your tablet, and like the idea of trying the different postures and methods for a full-body workout, this machine could end up being a great asset for your workout routine.

But, those that can’t use the app may feel short-changed by the simplicity of the console and features. In the right home, this sturdy ANCHEER exercise bike can still offer a great workout for those in need of a little more diversity.